Moving Past Adversities #6: The Quest to Feel Pretty, Lupita Nyong'o and Why it matters to some Muslims


Prophet Muhammad (peace be upon him) said:

Today Islamic beauty and fashions are hot. There are websites and blogs galore dedicated to keeping Muslimat world wide on top of their of A game, if they want to be. However, not so long ago, like in the ancient 80's and 90's, there weren't a lot places that American Muslim girls and women could go to talk and learn about beauty or Islamic fashion like there are today.

Those type of pearls of advice were like trade secrets. You had to be invited or given a golden ticket to late night, cast all the men away basement henna parties, engagement parties, Eid parties --- it was always a party though. At these un-facebook'd, un-evite'd, un-instagramed' parties sisters, young and old, revealed themselves in ways that at least 359 days out of the year they were not able to.

At our secret events, it was all about beauty: the hair, the make-up, the right outfit and

shoes, the henna, and uncut imported oils and bakhoor. It was about affirmation in a lot of ways for our elders that, "they still had "it" - the beauty and style, that most had left behind or hung up away in their closets or basements when they had entered Islam....to be free of that pressure to be pretty.

But, I always wondered why this was the case. Does not every girl - woman desires to feel pretty in some organic way, atleast?

It's not like putting on a hijab, trouser socks, jilbab, abaya, niqab, gloves, and arm sleeves (stop where ever you find yourself on the line of outward modesty) steals all of our pretty as Muslimat! A quick spin of the scroll bar on most social networks today would demonstrate an impressive collection of Muslimat selfies, world wide, in various styles of hijab who boldly embrace pretty. Some Muslimat luxuriate in their hijabs, niqabs, and abayas.

But for sure in the past and still thriving today in the present, there are those Muslims who are fearful and adamant against pretty. They cite meticulously selected ayaat and ahadeeth that solemnly paints a gray canvas that depicts Muslimat void of pretty, in any context.  And some of us buy into it, grudgingly or voluntarily. We sike ourselves up to believe that by suppressing pretty, we become way better than pretty. We become pious! Yes, that sweet, coveted piety that is grand in the eyes of our family, husbands, Muslim community --- and in us.

So in attempts to gain a higher pretty (that is often still demonstrated outwardly) some of us cast that other heifer to the side, closet, storage boxes and trunks. 359 days of frumpiness and ho humming the time away. You know until she is needed again: engagement parties ("you know you can't go to a Muslim man without any "pretty" - he'll sideline you and get him another wife!"), Eid parties - ("you know you can't step out with those sisters without any "pretty" - rumors will swirl the night away"), henna parties ("wait, you can't go to a party to get "pretty" without beginning in some "pretty" for them to work with, right?")---  it was always a party though.

That is until we meet someone - Muslim or non Muslim, it really doesn't matter, who wears pretty full-time in a way that isn't high and mighty, vain, or aggressive. It's just there. You see it in their walk, their behavior, their smile - heck, even their energy feels like pretty! And you go home sulking; never receiving or giving pretty unless it is summoned up, not for you --- but for someone else. And that feels sad or lacking, less than maybe.  And that longing creates waves that are so ultrasonic that you are instantly connected to the waves of others longing to release pretty. But  some times we just can't disregard those who have already mastered it as well. 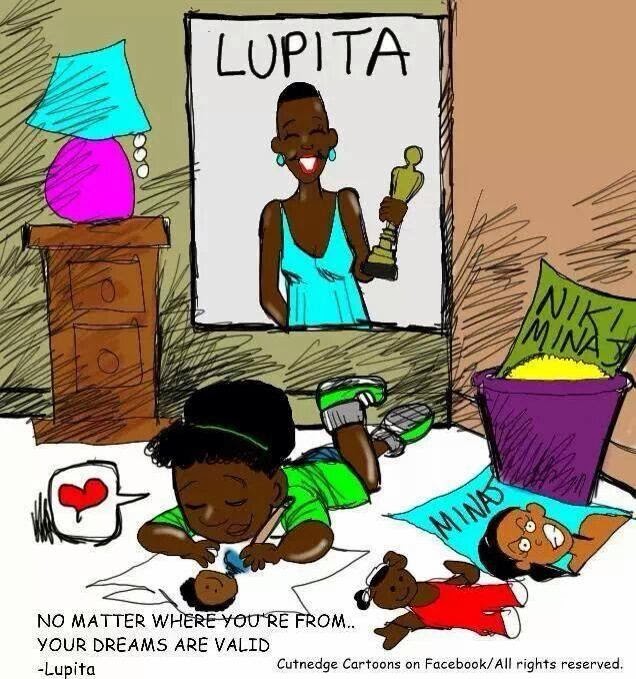 Like Lupita Nyong'o. There has been such a storm of chatter on this young lady (a Five College Consortium alumna, Hey Massachusetts!) by Muslim women and men  before and after her triumphant Oscar win. As if it is scandalous now for Muslim women to even recognize pretty, in any context besides the manufactured ways that certain segments of Muslims meticulously construct for us.

That is until they need you to go pull pretty out of her backroom, closet, or storage box and use her as if the the two of you were real friends --- for them! Truth be told, so many of us just don't know her like that.


“Allah is beautiful and He loves beauty.”


I started with this hadeeth, because I truly love it. and its simplicity. I memorized this portion of the hadeeth early on in life. However, it wasn't until I was in my late teens that I stumbled upon the full hadeeth and was able to gain a much richer understanding of all the nasihah that the prophet (saaws) had completely bestowed on us: 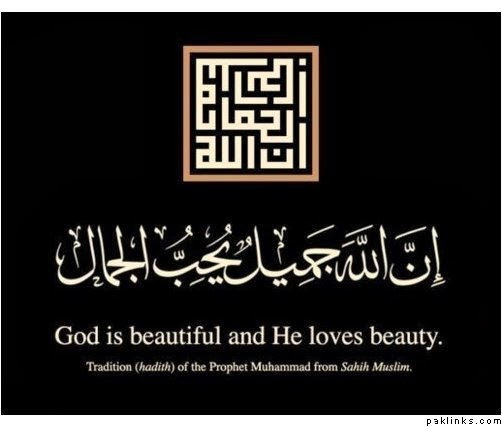 From 'Abdullah ibn Mas'ud radiallahu 'anhu who said that the Prophet sallallahu 'alayhi wa sallam said, "No one will enter Paradise who has an atom's weight of pride in his heart." A man said, "What if a man likes his clothes to look good and his shoes to look good?" He said, "Allah is beautiful and loves beauty. Pride means denying the truth and looking down on people." [Related by Muslim #131]

So how do we move past this adversity (M.P.A)? Here are some really simple common sense tips that I have picked up along the way, that I would like to share:


1. Pretty can be cultivated and expressed in many ways by Muslim girls and women. As long as it does not exceed the limits set by Allah, if it doesn't interest you: don't steal it, repress it, or ignore it in your sisters, mothers, daughters or wives.

“O Children of Adam! We have bestowed raiment upon you to cover yourselves (screen your private

parts, etc.) and as an adornment, and the raiment of righteousness, that is better.”

2. Those who possess the best behavior and character are the prettiest of them all.
In Saheeh Muslim it is reported that the Prophet (peace and blessings of Allaah be upon him) said: “Allaah does not look at your outward appearance and your wealth, rather He looks at your hearts and deeds.” (Saheeh Muslim, no. 4651).

3. Some Muslim girls and women don't know how to"jump pretty" , have forgotten how to or have had their pretty stolen from them by time, responsibilities ( husbands & children) or don't know that pretty has a place within  Islam. Encourage a rebirth of pretty in your sisters!

Sunan at-Tirmidhi it says, "Allah loves to see the effects of His blessing on His slave.'' [#2963. At-Tirmidhi said it was hasan sahih] It was reported that Abul-Ahwas al-Jashami said the Prophet sallallahu 'alayhi wa sallamsaw him wearing old, tattered clothes, and asked him, "Do you have any wealth?" I said, "Yes." He said,"What kind of wealth?" I said, "All that Allah has given me of camels and sheep." He said, "Then show the generous blessings that He has given you." [Sahih: Related by Ahmad #15323, at-Tirmidhi #1929 and an-Nisa'i #5128]