Beneath Her Feet by Author Umm Juwayriyah Part 2 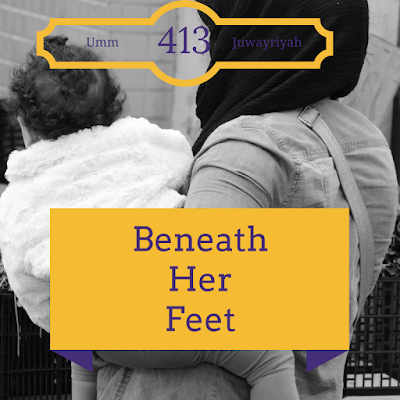 That's it! This child done made my pressure shoot all the way up. My chest. I can't breathe. Oh, Allah! Help me breathe! I am gonna kill Surayah if I make it through this. I really, really can't breathe.

He is the One Who sends to His servant manifest signs that He may lead you from the depths of Darkness into the Light and verily Allah is to you most kind and Merciful.(Qur'an 57:9)


Darkness had been every where. I was filled with so much darkness.

“Patty, where you at, woman?” His voice was full, rich, almost creamy as it embraced the room in our tenement. He would just show up out of nowhere from being everywhere, but here with me.  “Come on now! Get on out here, Patty! I got something for you!”

“Hold your horses, Karl! I’m coming.” I didn’t want to get up and go see him. I didn’t want to be at his beck and call any more. But at nine months pregnant, what choice did I have? He was still living his dream. He was still in the band playing his guitar with the Blue Notes. He was just living. I was stuck in these three small rooms. “You done finally decided to come home and…,” I screamed.

“Happy Birthday, baby girl!” Karl sang in his baritone voice. “What you think? You like it? C’mon, sweet Mama! Say something, woman! I’ve been working my tail off for months to get you this. Patty?”

“Can you dig it? You gon’ need to stay warm on the road once you have that baby!”

“Karl! What you talkin ‘bout?” I questioned him. He pulled me closer to him and kissed all over my face before pulling me into warmness of the coat. It was heavy, but it fit perfectly. “I ain’t ‘bout to go on no road with you no where. This little boy inside me ain’t gonna be running ‘round state to state.”

“Ya Momma can watch him then. We gotta make this money, Patty. How we gon’ feed him? Huh?”

“Karl Hicks, my Momma done raised her kids. She ain’t gon’ raise mine. I’ll just have to find me a job. JC Penney’s stay hiring,” I decided just then that I was gonna have to leave Karl and work for myself and my boy.

“Check the uh left pocket for me, sweetness. I think I left something in there.”

“I thought you said you got me this coat? How come you left something in the pocket? You had some other biddy  wearing it? What type of games you playing with me, Karl? I ain’t gonna keep putting up with you!”

“Woman, would you just check the pocket and stop running your mouth! Lord! I already need me a cigarette and I ain’t been here with you but five, ten minutes!”

“That’s ‘cause you always got some mess going on! I ain’t gonna have this mess around my son when he come.”

“Your son? That boy is mine! You heard me? You just carrying him for me!” Karl smiled big. I knew he was right. I knew that this boy was going to look just like his Daddy and act just like him, too. He'd love me just as much as Karl, if not more. I didn’t have nothing else to say. I dug my fingers into the pocket on the left side and felt around until my fingers felt thesmall metal hoop. I pulled it out slowly. I felt ridges. I felt the stump in the middle. My heart thumped. It couldn’t be? “Karl? You didn’t? Karl? Oh, God!”

“Yea, I did. Go ‘head and take a look, pretty lady! You so pretty!” he laughed. “See, you gonna have to start trusting me sooner or later. My word is bond! You can take it to the bank, baby.”

I looked at the ring and cried. I ain’t never had no diamonds before. I hadn’t never even seen one up close. My ring had little diamonds around the band and in the middle of the ring was sparkly diamond stone.  “Dis too much, Karl! You gon’ have to take it back so we can get some stuff for this baby. It’s beautiful. But I don’t need no fancy ring.”

“Patricia, yeah you do. I ain’t get to give you a wedding. You deserved that too. But I got this ring for you. You done helped me change my ways and be a better man. I think ‘bout you on the road and that boy. Ya’ll my family, not the fellas. You’re not just my girl, you’re my wife. My rib. I'll get the baby some stuff today. But that pretty ring is for my pretty wife with that pretty voice.”

“You ain’t never talked like that before, Karl. I don’t know if I done changed you.But you sound like you changed.”

“ Well, I did meet this cat in Harlem. He was standing outside of the club all night in the cold.”

“What he was doing? Selling that smack? You know betta than to try that stuff. It ain’t nothing but from the devil.”

“Nah. He wasn't selling no dope, Patricia. He was giving out these books called the Qur’an. Said the creator can’t be like His creation cuz God is One! Like he can’t have no son or wives or none of that stuff that they told us in the church.”

“Sound like crazy talk. Harlem full of them crazies. You betta be glad to be back in Boston. I hope you ain’t stand there and listen to him, did you?”

“Yeah, I did, Patricia. Allah, that’s named for God in Arabic. I think you should read the Qur’an with me, too.”

“Just think about it some. Don’t just say “no” without giving it some thought, baby!

“I don’t want to argue wit you today, Patty. Let’s just be cool."

“I think my water broke!”

“Kareem! Wake up! It’s time for Fajr. C’mon now, Kareem! Get up, boy!” I yelled as I shook his long, lean body padded by the comforter. He blinked his eyes then rolled over. “Don’t make me get the ice water, Kareem!” I teased before leaning down and kissing his cheeks.

“Shoulda took ya butt to bed! Stop staying up playing those silly games and you won’t be too tired to get up and pray. Move your butt, Kareem. Go make wudu, sweetie.”

Kareem flipped the blanket off, swung his legs out of the bed and leaped to the door before I could even take a step. At 14 he towered over me but he knew what was best for him. Challenging me wasn't for his good. He did his best to mind me most days.

“Don’t you wake up that little girl  stomping with those big feet of yours either!” I warned him before tiptoeing down the stairs to go pray by myself. I hadn’t seen Ahmed, Surayah’s father in two long, empty weeks. Kareem had been counting the days right along with me. I knew he was hoping he wouldn’t come back.


“As salamu alaikum wa rahmatullah - As salamu alaikum wa rahmatullah,” I offered the angels peace then relaxed my body on the prayer rug to make supplications. There wasn’t much time to rest though. I had to be to work in an hour. Kareem would have to take care of his little sister again.. There was no one else to help us during the week this summer. My parents had left Boston and moved South and my sisters were in Springfield. I needed to move on with my whole life. This wasn't working. With two jobs to work, I was barely keeping the rent paid, food in the fridge and the electric working.
“Salamu alykum, Yasmeen!” croaked Ahmed. He hobbled into the small living room smelling like an ash tray and fell down onto the futon. “Uh, is there anything to eat in the kitchen for me, Insha’Allah?” he kicked his boots off and threw his kuffee on the floor.
“Where you been?” I threw out at him.
“Working. Why?”
“Two weeks straight? Ain’t that much working in the world, Ahmed.”
“Yasmeen, I’m on the road trucking. I dropped a load and got another order I had to make. Came straight home when I finished.”
“That ain’t what I’m hearing. Been heard you out there running ‘round with a new sister out in Worcester.”
“Whoever tellin’ you them lies, they need to mind their own business and stay out of mine. What I got to lie to you ‘bout?”
“So if you made two orders, where’s the checks? I gotta get to the laundromat and wash clothes this week.”
“I don’t get paid til the end of the month. You know that too.”
“Ahmed, I don’t know nothing. Apparently, you spending your money elsewhere ‘cause you ain’t never have nothing to give me or Surayah. If it wasn’t for Kareem’s father …” I spat out too quickly. He couldn’t even let me finished. Ahmed eyes welled up, his fits balled, and he had sprung up from the couch like a lion then yanked me by the arm up off the floor like a rag doll.

“What I tell you ‘bout talkin’ to that old man? Huh? What Allah say about obeying your husband? You so worried ‘bout what I’m doing, where I’m going, every time I hear you talking, you got something else to say about Kareem’s father. If Khalil was alladat, you should’ve kept ya big behind wit him! You think that brother still want you? Look at you? You getting old anyway! Go back to him if you wanna. I know what though, you gonna need more than Fajr to leave this house walkin out of here alive!”

“Ahmed, let me go! Turn me loose now!” I whispered softly as I scanned the room for something to protect myself with. “You’re tired. Go ‘head and get to the kitchen. I got some left over chilli in the fridge.”

“Shut up!” he yelled as popped me upside my head with one hand and gripped my arm tighter. “You don’t know how to talk to no man! That’s why that old brother left you alone. Got tired of you running your mouth all the damn time! I don’t care how cute you think you is. You need to shut up some time. Don’t ask me about my check! When I give you the money, that’s when you’ll get it. You wanna be talking down to me. That’s why you need a co-wife, teach you how be a wife!”

“Alright, Ahmed. You told me. I gotta go get..No, No, Noooooooo! Kareeem!”

It was too late! Kareem had swung his bat and hit Ahmed in his bad knee. He dropped to the floor and rolled back and forth as he wailed in pain. I jumped in front of Ahmed just as my boy raised the bat up again in the middle of his stride. He was gonna swing that bat again.