Dear Sesame Street: Don't Over Simplify the Effects of Autism!

Dear Sesame Street: Don't Over Simplify the Effects of Autism!


There's a new character making her way to the famed Sesame Street and I am excited and hopeful. I was born in the 80's and I grew up loving all of the colorful and zany  Sesame Street characters. The songs, the themes, the diversity of the neighborhood was always ground breaking. Now I am sharing them with my own children.

It's for that same reason  coupled with the knowledge and the battle scars and the fiercely protective love that only comes to a Mama raising an Autist for the last nine years that I implore the writers and production team at Sesame Street to resist the urge/editors/powers that be who suggest oversimplifying the effects of Autism on their new Autistic character, Julia.

As a writer and storyteller for children, I know first hand how difficult of a task it is to impart information creatively to young ones.  Writing creatively and storytelling is a super power and the Children Television Network and Sesame Street have long secured their superheroes status. But Autism is very real, very challenging, very emotionally draining, confusing, loving, and sometimes even funny. Every day I watch my little girl grow and learn and struggle with something new. Sometimes it's really painful to watch and deal with day in and out. But every day I am inspired by her strength and resilience. My daughter is beautifully human and flawed, as we all are, not a typecast for children to memorize word for word. My little girl needs real allies out in the world: on the playground, in school, at Walmart, and at Chuck E. Cheese's who understand that just because Julia on Sesame Street app acts one way, doesn't mean all Autists act that way too. Adults and children alike need to see the full spectrum of Autism: the good, the bad, and the ugly.

It's a tall order, but I am hopeful. After all, the writers on Sesame Street are super heroes.


Hind's Hands ~ A Story About Autism 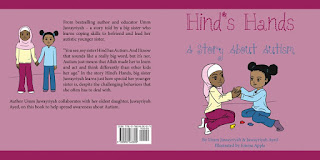 Posted by Author Umm Juwayriyah at 5:31 AM No comments: