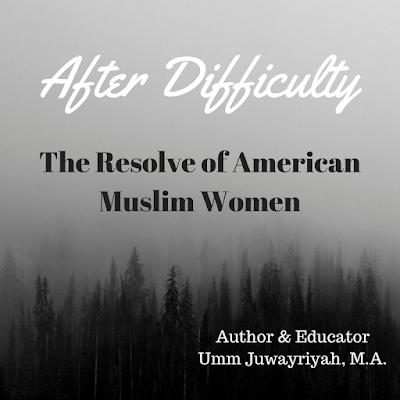 It happened. You watched it on the television with your family or you followed it on the internet through your smartphone while you worked over-time. Maybe you didn't watch it at all. Maybe you went to bed exhausted from running errands, cooking, cleaning, and taking care of  everyone but yourself. Hours later the adhan on your clock/phone/desktop computer  flowed into your heart and ears and beckoned you out of your lush and warm bed. Like any early morning prayer soldier you made ablution, you prayed, and then the news hit you...


Trump had been elected the 45th president of the United States and you - YOU, American Muslim women and girls and babies....be afraid! Fear Trump! Cry! Check your surroundings! Fear! Don't go out alone! Fear! Your co-workers are mean muggin' again? They're plotting against you! Fear! Trump's supporters will get your babies at school! Fear! Take off your hijab! Fear! Make your daughters' take off their hijabs! Fear! Trump is coming! Fear! Don't pray in public! Fear! Don't pray at all! Fear! Fear Trump - wait?! What?

If you didn't know, please non-Muslim media - write this down: There is no God but Allah, and Muhammad ibn Abdullah, is His Slave and Messenger! Muslim women fear none but Allah!

But now, these people who are writing these articles, tips, reporting the news with these flat narratives about American Muslim women - who are they? Where did they come from? Are they even Muslim? Did they call for a American Muslim women get together on SKYPE or WhatsApp, in the basement of the masjid (#sideeye) or during someone's nikkah and decided it was okay to define us as so fragile? To shame us? To steal our voices? To scare us? Or is this really just a ploy to cancel all of the fall and winter hijab fashion shows with their rhetoric?!

What I know after being born, raised, and living as a Muslim for over 30 plus years is that American Muslim women are some of the strongest, faithful, giving, creative,  proud, resolute, "making things happen" and trendsetting women in the entire world. Our names, our clothing, our style, our vocabulary/slang has permeated all of America's cultural fabric! None of that happened by chance. Of course we believe our Creator, Allah, willed it, but we also know that generations and generations of American Muslims, men and women, struggled for it as it well!

When those first boats of slaves landed in Jamestown, Virginia in the early 1600's, Muslim women were aboard! They worked, they slaved, they endured, and they fought when and how they could  to maintain their faith so that many who have chosen not to continue to carry their faith today, can vote and live how they want. How quickly we forget that many American Muslim women suckled and cared for their masters' children just like Christian women did. How shameful that we don't recognize the accomplishments of American Muslim women from various ethnic backgrounds that have contributed to education, science, law, and fashion in America!

Oh, you're were too busy looking for one of those Muslim bean pies this fall? Well, what do you know, another sweet invention of American Muslims. And what's that, you don't want any pork in your collard greens so you are skipping over those "gentrified greens" Nieman Marcus is pushing and grabbing a platter made with Halal turkey ham and beef bacon from your local mosque, Karim? Thank an American Muslim woman! Looking for introductory Arabic class? Need to raise my money to pay the light bill at your local masjid or Islamic center? Someone to babysit during the weekend classes? You son is short on money needed to attend basketball camp? Your daughter is getting married and needs someone to sew her a modest and fashionable dress? Your ex-husband and his new wife is cutting up with you and they need some stern Islamic advice? Call your American Muslim mother, sister, aunty or grandmother to handle it.

See, the Muslim women that I know were not raised to hide their faith! They weren't raised to feel less than or cower in front of any men, be they kings or presidents! The American Muslim women that I know are business owners, lawyers, students, homemakers, and world travelers. They proudly take their Islam where ever they go. Any hardship they face, they plow through it with their heads held high. "Allah tests those whom He loves the most," a sister-friend just reminded as we discussed an interview for a job that she didn't get. Was it because of her hijab? Was it because she's Black-American? Was it because she took a couple of years away from working to raise her children? Was the H.R. rep an Islamophobic Trump supporter? Will she even find a job in the new Trump era?

Muslim women arrived with faith on ships as slaves to America and they were tested. My mother became a Muslim in Harlem, NY during Nixon's era and she was tested. I was born Muslim in the 80's during Reagan's presidency and I have weathered through many tests and I know many more are waiting. My oldest child was born in 2001 two months before 9/11. As an Afro-Arab Muslim American, she has lived through two  presidents, Bush, Jr. and Obama. Now Trump is coming. I know she will face some hardships in this world for sure. But I don't tell her to be afraid. I don't let her surround herself with those who question her ability to thrive and overcome challenges. I don't let others write her narrative! No! Not when she has two grandmothers on two sides of the world who have fought, loved, and prayer through everything for Allah. Not when she can see and learn from the resolve of American Muslim women  walking proudly throughout this earth and battling every single day for none, but Allah.

I whisper into my daughter's ears every night words of armor that American Muslim women from the days of old have passed down to us in Arabic and English:


American Muslim are not your sob story! We are prepared. We have faith. We have each other. We are resolute.

Sisters, don't try to dodge the difficulty because "they" want you to be afraid. Know that this life was created to be a test for the believers. Know that you are not ever alone! Know that a great line of American Muslim women have been tested before you. Stand tall and never doubt your gift of Eman. Trust in His Sovereignty and know that truly, there is but one Almighty King of all Kings and He is your greatest protector and friend. He only needs to say "Be" and  it is ---- ease and relief. Trust that it will reach us again!

Posted by Author Umm Juwayriyah at 5:49 AM No comments:

Posted by Author Umm Juwayriyah at 10:33 AM No comments: