Nour Tagouri and The Sell-Out Culture Within Some Immigrant Muslim Communities. 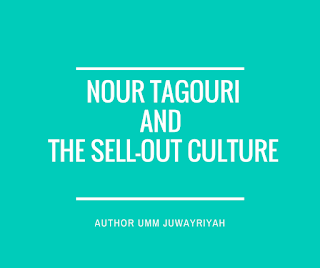 Nour Tagouri is a young Libyan-American Muslimah Journalist and she is all the talk today. I actually heard about Ms. Tagouri a couple of years back around 2012. She made headlines after posting a picture of herself covered in hijab sitting at the anchor desk at a news station. She labeled her picture with "my dream". Muslims and non-Muslims alike shared the picture thousands of times and helped her picture go viral.

I remember thinking how great it was to see a young Muslimah from an immigrant American community with goals that were non-typical of her culture. Many African and Middle Eastern families heavily guide their youth towards STEM subjects. Grandparents, parents, aunts, uncles, and even neighbors take great pride in boasting about their family and friends who go off to America, England, and other Western countries to become a doctor or engineer and lawyers, too. It is almost as if other professions don't exist. For many African and Middle Eastern families, other professions outside of the STEM field are not valued.

So again, it was really refreshing to see a young Muslimah from an immigrant background with a unique dream (to her community) and her chasing after it. Since 2012, Nour has made her run around Muslim American organizations, started writing for Huffington Post, spoke at TED, and the list of amazing "kick down the door and let me in" accomplishments go on and on.

As a born Muslim Black American writer, I have watched her rise and felt pride. Nour Tagouri is the next generation representing Muslimat everywhere in an industry that is super hard to crack into for women period. Being a hijab wearing Muslim woman just triples all of the obstacles. So yes, I watch her, I smile and I continue to pray for her success.

But there is a down side of success. The higher you go, the more out there you get, the more temptation, culture vultures, "frenemies" and struggles you encounter. We, American Muslims, have sat back and watched Muslims in high places, too often from the first and second immigrant Muslim communities, endorse George W. Bush, appropriate narratives of American Muslims, exclude and or refuse to address the needs of indigenous Black, Latino, and White Muslims, create prayer spaces with collective Muslim money that ends up resembling country clubs for specific ethnicities, buying and operating liquor stores in minority communities, using Jumu'ah (Friday) sermons to pander to local law enforcement and politicians and the list of cringes goes on.

Some times I can find excuses for the aforementioned behaviors. Then there are times when you see an immigrant Muslim make it really high some where - like become a politician or a writer or an actress or they come into some money and the spotlight is draped all over them. Then they say or do something that is so far to the left, weird, or just crazy careless to the plight of Muslims. Your heart sinks, your eyes roll, you suck your teeth and you turn off all social media and you exhale. Disappointment happens. It always happens. And yes, it hurts a little. But, we're humans and so are they. At the end of the day, we are a community, so we deal with the hurt as best as we can.

Nour Tagouri has had her moment. She climbed the mountain, she swung up to the top, she grabbed the spotlight and then -bam- she gave an interview (fully covered) to Playboy Magazine?!? Now, now, Muslims! Hang-on, you say! Playboy is a highly read magazine and it will of course give Miss Tagouri a ridiculous amount of exposure, and it will garner more awesome opportunities, enshallah. Focus, Muslims. It's JUST a magazine.

I gotta keep it 100.  I gotta call it like I see it. It's a sell-out!   It's her saying, "by any means necessary for my career!" It's that liquor store owned by immigrant Muslims on that avenue in the hood where drunks hang out and get stuff on credit because the immigrant Muslims are just striving to pull themselves up by their boot straps and claim their American dream. It's saying to heck with what Playboy represents or how they have historically objectified and victimized women. It's saying I am a Muslim woman, but I am really just like you (Playboy readers). I want to be like you even though everything this magazine represents is against my way of life. It's saying I value my fame, more than I value those little Muslim girls and boys in America and around the world looking up to me. It says don't worry about my standards, I can do this and win my own way. It's a sell-out.

Maybe I am overthinking this. I don't think I am though. I grew up in a predominately immigrant Muslim community in Western Massachusetts where indigenous Black, White, and Latino Americans are the minority. It is a city where the majority of Muslims first language isn't English. Where the board members were doctors and ....more doctors. Biryani, kunafa, and baklava were sold after Friday prayers, and undercover police officers and the mayor often stopped by to "answer community members concerns" and look for informants.

I am very certain that there is a sell-out culture within some immigrant Muslim communities. Miss Tagouri will be covered and supported by this community and many other Muslims who deem selling out acceptable because she has the spotlight. She is carving her own way they will say. She isn't a doctor or a lawyer. She is a journalist with the world's eyes in her hands. That's kinda like a doctor, right?

Hear me when I say this: I am not angry or calling for Miss Tagouri's hijabi card to be pulled. I still love her passion. I am still going to support her. But as a writer and storyteller, I know it is my job to address issues, inconsistencies, drama and write what I see so that our community can think about and discuss them. A Muslimah writer needs standards, I believe. I also believe as a Muslim, how you win is just as important as the win itself. I want Nour Tagouri to win and inshallah she will. Hopefully, in the future she will think more carefully about who she works with and the impact it has on the Muslim community. We need Muslim women leaders, not just leading Muslim women in our community.

Come correct, sis or one of your sisters with pens will call you on it!
Posted by Author Umm Juwayriyah at 10:41 AM No comments: